From the Movie Screen to the Dojo 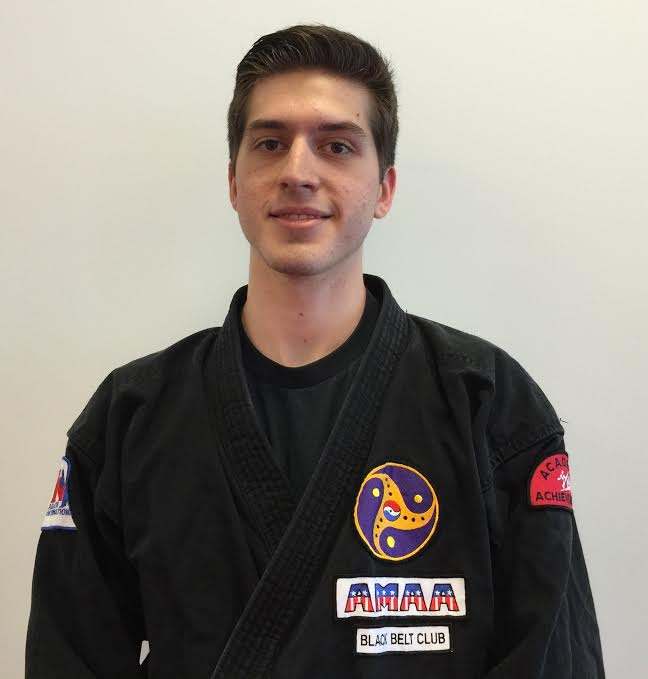 Like most people, the first time I saw a Jason Bourne movie starring Matt Damon, I think I ate some popcorn, thought, wow, those are some great fight scenes, and was entertained. But the same movie was the catalyst that helped ignite a life-long passion for the martial arts for high school senior and black belt Nathaniel Sprecher.

After seeing the Bourne movies as an eighth grader, Nathaniel was inspired to check out martial arts. A friend from his basketball team, Harrison Stott, was already taking karate at Karate International of Apex, so Nathaniel joined the dojo. The rest is history. This year, Mr. Sprecher was awarded Black Belt of the Year.

Nathaniel earned his black belt in a record two and a half years. His dedication and focus are exemplary. He came to class four times per week and continued his training at home. He’s constantly coming up with new ideas for self-defense and fine-tuning his technique. He even performed exercises to toughen his hands.

I asked him, “What’s your favorite part about karate, other than being able to beat people up (if you need to),” and he laughed. “That is pretty cool,” he said. Then he told me about all the aspects of martial arts he finds interesting, other than the obvious. To him, it is a great hobby—a lifelong one, with a lot of depth. It has historical, cultural, and technical aspects that are unique. There’s always something new to learn. As for his favorite part of karate class—sparring, no question. And he’s good at it too. Just ask the other students about his killer ridge hand or his fast footwork.

Outside of the dojo, Mr. Sprecher excels in other activities. For several years, he played and even coached basketball. He is also involved in the arts and enjoys drawing in pen and ink. He is a member of the National Honor Society and gained admission to his top choice school, Grove City College, where he intends to study computer science. Mr. Sprecher helps teach some of the children’s karate classes; he also assists with parents’ night out at the dojo. The kids love him. He’s always ready with an encouraging word or helpful suggestion. He brings a passion and intensity to his practice that is unparalleled and inspires other students.

Currently, Mr. Sprecher is working toward completing the requirements for his second-degree black belt, and he also plans to participate in martial arts programs available at his college.

Mr. Sprecher was kind enough to stay after class and demonstrate Bassai Dai kata for us. He probably didn’t know what I was planning, but he’s the ultimate good sport. So I present the trailer for Action Hero, starring Karate International of Apex’s very own Mr. Sprecher.

If you’ve ever seen a fight scene in an action film and thought, “I wish I could do that,” come check out Karate International.

You can do it.

You just have to show up and put in the work.